I received a call the other day from my new OB's office. I was SO excited to get the call and I cannot wait to go. My first appointment with her is on the 30th. The receptionist was really nice and pleasant on the phone. She asked if I wanted to have the screening done for any potential problems with the baby but I said no (part of me wants one just so I can have an ultrasound) because even if something showed on the test, we would never terminate the pregnancy.

I ended up calling the office back and asking if the doctor would try and listen for the heartbeat and the receptionist said yes and that they would probably do a bedside scan if I wanted to see the baby...YAH!!!

Yesterday morning, I said farewell to my Progesterone suppositories (AKA vagina balls). It's not that I hated them or anything, okay, I did. I couldn't stand them! They smelt SO bad...it's all I could smell and it made me sick, they were messy, and in general, I just hated using them.

Even though I couldn't stand these things, I was afraid to stop them. I wasn't as afraid to stop my Estrogen (which happened on Saturday) as I was the Progesterone. It's funny how the brain can just fixate on something. But so far so good. I don't miss having to take the progesterone one bit.

I was almost giddy yesterday morning when I took my last one. I took a picture of the package just so I could remember it fondly. I normally took 2 balls 3 times a day but when I got one of the packets, one of the foil pockets had been punctured and so my paranoid brain decided to through out that ball. 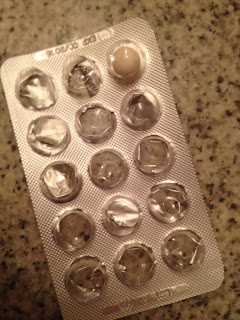 Since we found out we were pregnant, I've wanted to burst and share the news with everyone. And now that we have waited and we feel we can announce, I'm hesitant.

It's been our little secret that only close friends and a few family members know about. It just seems so personal and so private at the moment because I don't have the big pregnant belly yet.

But, my husband and I decided to share the very special news with everyone. We made our announcement a photo of our son wearing a shirt that says "Only child ~ Expiring June 2014"

Yesterday I spent the better half of the morning on and off the phone with my family doctor's receptionist and my nurse at the fertility clinic. My family doctor's receptionist is great. At one point, I broke down crying on the phone and she was great...she told me not to apologize and that she knows this is stressful but I need to try not to stress.

The reason why I broke down is because I had spoken to my fertility nurse beforehand and she told me that this is my healthcare and if I want to be seen by an OB, that I have that right to have a referral sent. She told me I'm not high risk but she said that my pregnancy is not straight forward because of the bleeding, the IVF, and all of the scar tissue I have from multiple abdominal surgeries. I told all of this to the receptionist through tears.

My family doctor originally wanted me to call the fertility clinic to see if they would do an ultrasound for me, but my nurse told me they couldn't, which I knew.

But later that day I received a phone call from my nurse saying my family doctor faxed my fertility doctor asking to do an ultrasound because I was "bleeding profusely." Now my nurse knew I wasn't bleeding profusely but that I had gushing blood in the morning that was slowing down over the day. But she said my fertility doctor agreed to do the ultrasound and that it's good my family doctor stretched the truth because it will ease my mind.

My family doctor's receptionist also told me that they sent in a referral to a high risk OB. I didn't request to be sent to a high risk one, I just wanted to be sent to a regular OB...it would just make me feel more comfortable during the pregnancy. I'm used to the fertility clinic where I could call anytime and speak to a nurse and I feel I would have the same thing at an OB and if they thought there was a problem, there would be no waiting for an ultrasound, I could be brought in the next day or brought in to listen to the heart on a doppler.

I'm so happy I was able to have an ultrasound this morning. It looks like the blood must have been the second blood pocket because it's gone now!! I was so thrilled and even more thrilled that Lil Bubs is doing great. Lil Bubs is measuring 11 weeks 2 days. 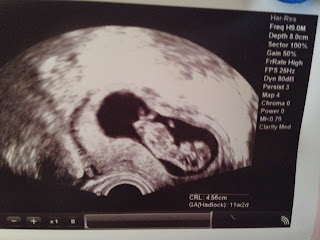 Anxious is how I'm feeling right now. When I was a patient at the fertility clinic, any time I had bleeding I could call up my nurse, she would talk to a doctor, and they would ask me to come in for an ultrasound. Well, now that I've graduated from the fertility clinic, I'm only seeing my family doctor. My family doctor is great, but he is not an OB. He doesn't have an ultrasound machine, he doesn't have a fetal Doppler, so how is he supposed to know if anything is wrong? Where I'm from, you don't see an OB until you are 35 weeks (and that's not a typo).

So I'm supposed to go from seeing my baby at 9 weeks 5 days until 20 weeks when I will have an ultrasound and then not see the baby again until 35 weeks? How is my family doctor supposed to know if anything goes wrong if he isn't able to listen to the baby's heartbeat?

Also, with my past medical history and all the bleeding I've had this pregnancy, I think I should be seeing an OB.

So today, I started to bleed again. It came out in a gush and has seemed to slow down. It appeared to be brown blood so I'm praying it is just old blood from the blood pocket that still showed on my last ultrasound. But I'm freaking out a bit because I have no idea. I could go to emerge and they would give me an ultrasound there, but that would be even more stressful because I would be waiting at least 8 hours because the wait times are ridiculous.

I've called my family doctor and spoke with the receptionist. She is going to talk to him and get back to me. So now I have to sit and wait...once again.
Posted by Kelsey at 06:56 No comments:

I'm so scared to stop the progesterone. My fertility doctor has assured me it's fine. He went as far to say that once there is a heartbeat, you don't need the progesterone. Still, I worry and think they should check my levels before they make me quit cold turkey. But then again, I am not a doctor. I did not study medicine for years and specialize in this field.

I pray God gives us this gift and blesses us with one of His children.
Posted by Kelsey at 11:14 2 comments:

Clothes Are Not Fitting

It's come to my attention that my clothes are not fitting me quite the same as they used to. I can't seem to get my pants to button up anymore and my zipper only wants to go up halfway. I bought a Bella Band and it's wonderful. I have to readjust it every so often, but its well worth it...its the only way I can wear my pants!!

My shirts seem to be that much more revealing, but I think that's because my breasts have gotten quite a bit larger.

On the weekend I treated myself and bought two new bras and some new undies. I had myself fitted and I had to chuckle when they told me I should be wearing a size smaller than what I was now. Do you see the bra I'm wearing now? Do you see how I'm popping out of it? And you want me to go a size smaller? Oh boy! I tried on 5 different sizes and styles before we found one that fit me good and it's not the size they said I should be (duh!!). The new bras are so comfortable. No more popping out and achy boobs because of a bad fitting bra. The undies I bought are also fabulous. I bought a size larger than I normally do and I made sure to find pairs without elastic bands of any sort (elastic bands make me feel even more uncomfortable).

Kelsey
Hi, my name is Kelsey and I'm a twenty something year old who lives in a big city. I am a proud mommy of two handsome boys and an adoring girlfriend to one handsome man. My life has been a bit of a roller coaster ride with Ulcerative Colitis, infertility, a new start at life, and so much more. My life can be chaotic at times, but I wouldn't have it any other way.